Well, today I managed to get all the boxes in the garage stowed away and so there was finally room enough for the bike to come home from its temporary stopover at the mother-in-law's shed.


The bike had been hiding under a cover and was very happy to be out of there. I loaded it onto the trailer and drove home, where I introduced it to its new room mate, my 2009 Suzuki Bandit.

As it was already late in the afternoon, there was no time to stand on ceremony and it was straight into the tear-down.

Off came the tank. As well as the new paint, this will need a bit of work as there is a small dent from LHS clip-on and also the removal of my son's intitials that he so lovingly carved into it with a Stanley knife (box cutter)... hmmmm

After that, I removed fairing, battery (now on charger), fork brace, carbs, exhaust system, foot pegs and hangers. I am also taking many pics to assist in the re-assembly and to insure against short term memory loss and brain farts!

Some parts will not be going back on of course, with the fairing, lights, and footpegs just to name a few. I have secured a neat set of rear sets from a generous bloke named Colvin, a contact on the AIGOR (Australian Internet Guzzi Owners Register) mailing list. This is a great mob of Guzzi enthusiasts and I highly recommend a visit and sign-on, especially if you reside in Australia or NZ.

The Lafranconi Competizione mufflers have definately seen better days, both have a small hole on the inside near the end. Looks like I will be in the market for a replacement setup. Maybe chromed headers and mufflers would be the go? Will have to think about it.

Anyhoo, not a bad start made today. Enthusiasm levels are at an all time high, so let the tear-down continue!

The best laid plans of Mice and Men?


Ok, here is the plan (subject to change at any moment, haha!):

Take 1 x pretty much standard Le Mans II as the base: 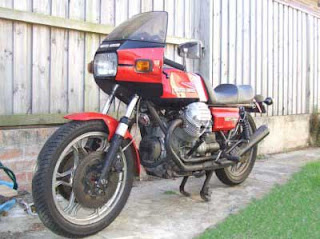 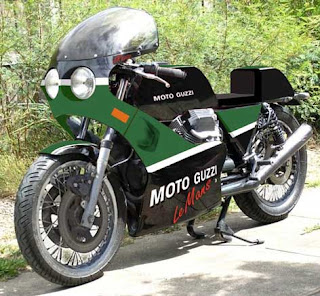 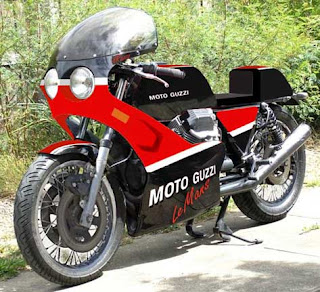 I wanted to use colours found on previous black Guzzi  models such as the 750S, 750S3 and 1000S. At this stage, I am favouring the green, but not fully decided. Plenty of time yet to make that decision! Why not let me know your thoughts by posting a comment? (Please be gentle with me)

The sharp-eyed among you will notice that the mock-up above has a square-fin motor. This is because I based my Photoshop image on the following  pic of an actual Crossbow fairing, fitted to a Le Mans III, and I was too lazy to swap out for round barrels.


Here is a pic of the fairing mounted on a MKII, found at Vintage Motorcycles Online from an excellent article, "Against the Wind", by Nolan Woodbury:

Finally for this update, here is a composite pic of the fairing I will be using:

Ok, where do I start? I luckily came across this bike approx 8 years ago as it languished in the driveway of one of my neighbours. It stood there forlornly for week after week after lonely week. The cover blew off almost every day, and I would religiously walk across the road and put the cover back on.

I did not have a bike at the time, and the Moto Guzzi Le Mans II had been a dream bike of mine way back in the late 70s, when I was just a young rider with stars in my eyes. One day I decided that it was a crime to have it out in the weather, rusting away. It was obvious that the bike was unloved.  I walked across, knocked on the door told my neighbour that I was 'happy' to stick it in my old shed (which was not much better than out in the weather!). He was only too happy to let this happen, and the bike was duly rolled across the road to its new location. That was when I decided that the Guzzi deserved a better fate. It took over two years of trying, but finally I managed to convince him to sell the bike to me at a very reasonable price. The partnership had been consummated!

Unfortunately, at the time I had little (read: none) mechanical knowledge of bikes and even less on Guzzis. I did manage to get the bike started by cleaning out masses of grunge from the carbs and replacing jets etc. The bike was last registered in 1999. I pulled the fairing lowers off, preferring a more naked look.

I then made the decision to get the mechanicals looked over and took the bike down to a certain well-known mechanic at Bungendore for a look-see. In the end, I decided to have the motor zeroed, Dyna III installed and braided bake lines added. It was ready early in 2007, and once back in Sydney, John at Motociclo in St Peters did pink slip inspection, and the bike was registered in Feb of 2007.

That was the beginning of four years of riding enjoyment that included two runs to Phillip Island MotoGP, Ruptured Budgie and Ragged Fringe rallies, and daily use as a commuter into Sydney CBD.

The bike itself ended up looking pretty much ok as you can see from the pics above, but I was hankering for a change. As a result, I decided to take it off the road for a makeover and refurbish. Initially, I intended to do a 750S3 look-alike but happened across a Crossbow Equipe dual-headlight fairing, one I have always admired, and so decided to use that as the basis for the look of the makeover.

I started collecting bits and pieces and now that I have finally moved to my new house with a sizeable and functional garage (a first for me, yay!), I am off and running on the project. It will be interesting to see how it turns out.